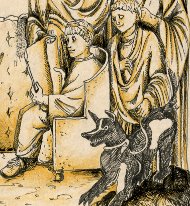 And drew a bloody trail along the ground.

Far off he heard their cries, far off divin'd

The dire event, with a foreboding mind.

With dust he sprinkled first his hoary head;

Then both his lifted hands to heav'n he spread;

"What joys, alas! could this frail being give,

That I have been so covetous to live?

To see my son, and such a son, resign

His life, a ransom for preserving mine!

And am I then preserv'd, and art thou lost?

How much too dear has that redemption cost!

This is a wound too deep for time to heal.

My guilt thy growing virtues did defame;

My blackness blotted thy unblemish'd name.

For foul misdeeds, were punishments too mild:

I ow'd my people these, and, from their hate,

With less resentment could have borne my fate.

And yet I live, and yet sustain the sight

Of hated men, and of more hated light:

But will not long". With that he rais'd from ground

His fainting limbs, that stagger'd with his wound;

Yet, with a mind resolv'd, and unappall'd

With pains or perils, for his courser call'd

With daily care, and mounted with success;

His aid in arms, his ornament in peace.

Soothing his courage with a gentle stroke,

The steed seem'd sensible, while thus he spoke:

"O Rhoebus, we have liv'd too long for me-

If life and long were terms that could agree!

This day thou either shalt bring back the head

And bloody trophies of the Trojan dead;

This day thou either shalt revenge my woe,

For murther'd Lausus, on his cruel foe;

Or, if inexorable fate deny

Our conquest, with thy conquer'd master die:

For, after such a lord, rest secure,

Thou wilt no foreign reins, or Trojan load endure".

To take his wonted weight. His hands he fills

With waving horsehair, nodding from afar;